Have you ever noticed this sign on Hwy 144 on your way North to Timmins and the wonders beyond? Well if you have you’ve reached a very “cool” spot in Canadian history but also geographically, the Hudson Bay Watershed.

A watershed is an area of land that drains all of its surface and ground water into the same ocean. You’ll notice of course that the sign says, “The Arctic Watershed”, which seems a little misleading but is still technically true. The Hudson Bay watershed drains into, well, Hudson Bay which then in turn drains into the Arctic Ocean.

On the flip-side of the sign, the sign lets you know that all of the water south of this point flows instead through the Atlantic Ocean watershed.  Here in Sudbury, for example, our water flows south into the Great Lakes and then out the St-Laurence River into the Atlantic Ocean. 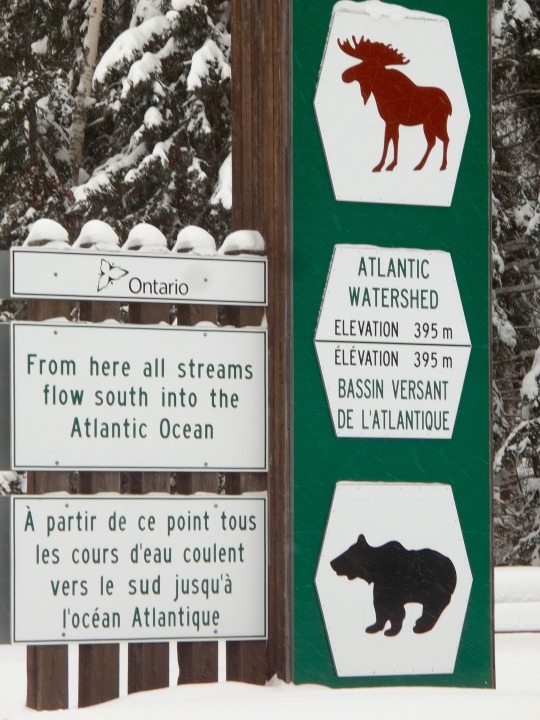 Historically this huge area of land was known as Rupert’s Land and was owned by the Hudson Bay Company from 1670 to 1870. For two hundred years they had the monopoly on all fur trade in this area, until it was transferred to Canada in 1870. So watersheds, or drainage basins, served as boundary lines for territories as well as some later treaties with First Nations.

So the next time you are heading North on Hwy 144, take a moment as you’re passing by and marvel at the implications of that sign welcoming you to “The Arctic Watershed”. Not only does a huge percentage of Canada’s freshwater drain through this area of land; a big part of our Canadian identity is linked to our freshwater resources. Canadian culture and economics, our energy and food are all linked to watersheds, as well as supports a vast number of terrestrial and aquatic habitats for wildlife and plants.

If you have a question for a scientist, please ask us at bluecoatblog.ca!